Blog by Umesh Puranik, posted on April 25, 2018 in Industrial

(This is the second article in the series on Industrial IoT challenges. The first article is here.) 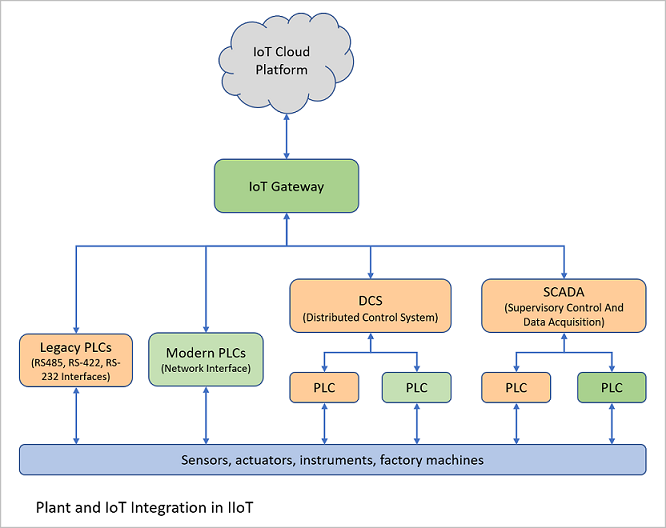 For IIoT implementations, one of the first hurdles is at the point where it all starts – the collection of data from the machines, instruments and sensors. (Also, it can be said to end here – with control of actuators and machines!) Most of the machines, especially in small and medium manufacturing enterprises, are not IoT capable yet. Thanks to the previous industrial automation revolution those are equipped with sensors and even programmable devices in the form of Programmable Logic Controllers (PLCs). However, these are still mostly stand-alone setups with zero to local-only connectivity. The Distributed Control Systems (DCS) and Supervisory Control and Data Acquisition (SCADA) systems could be interconnected to form a larger network. But such systems cover only a single plant or factory with no capability to exchange data with the external world. Their integration with the IoT world requires external hardware and software, like a gateway.

Completely replacing such legacy systems with the new age network-enabled systems could be the fastest way to adopt industrial IoT. But the cost and efforts associated with this would be a strong deterrent for widespread adoption. A cheaper and more acceptable approach would be to either upgrade such machines for IoT connectivity or device intermediate mechanisms (like gateways) that could facilitate indirect integration with the IoT world.

This is where the PLCs come into focus again. The most common way to interact with the factory machines is through PLCs. Machine sensors and actuator controls are connected through the PLCs for sense and control operations. Many, if not most, PLCs generally have the ability to communicate with other PLCs, SCADA systems, etc. to form larger control networks as well as provide visibility into overall operations of the manufacturing plant. Plugging in these PLCs into the Industrial IoT will provide the required upgrade path.

Most of the modern PLCs (except the entry level ones) have built-in Ethernet connectivity or could be augmented by using add-on Ethernet communication modules. Many PLC manufacturers employ proprietary protocols within their own ecosystem and this makes direct integration of PLCs from different vendors into a larger control system difficult. This known problem can be solved with the OPC (Open Platform Communication, also known as OLE – Object Linking and Embedding- for Process control) standard based software (client and server) as it enables PLCs from different vendors to communicate with each other.

However, the large population of the PLCs already present in the field, especially in the older industrial setups, do not have even the Ethernet connectivity. They generally have only the standard hardware interfaces or connectivity mechanisms. Getting such PLCs connected into the Industrial IoT is a real challenge because of the plethora of interfaces (RS-232, RS-485, RS-422, Ethernet, etc.) and protocols (Modbus flavours, Ethernet/IP and other proprietary protocols). In some cases, the PLC vendors offer add-on communication modules to enable the network connectivity. In other cases, one may need to use a device that acts as a bridge or a gateway to handle PLC specific communication on one side and the cyber world communication on the other side.

Such gateways are available commercially from many companies (e.g. Kepware, Opto22, Advantech, to name a few and others), with a variety of features and price-points. For a medium to large deployment, this could provide an easy, fast and cost-effective path. For small (and smaller!) setups, however, the gateway costs may start getting closer to the alternative of replacing existing older PLCs. For such cases, it could be worth exploring the option of building custom, low-cost gateways that are capable of just supporting a specific set of PLCs. Considering open-source implementations of OPC standard could be useful here.

Irrespective of the path followed, this first step is very crucial. Only after this, the fuel for IoT – the data from the machines – could be made available for the bigger things. But there is the second big challenge- how to handle the huge volumes of data being generated and where to process it?

Stay tuned for the next article!