IoT with Azure: The ‘Serverless’ Story

‘Serverless’ has been promoted to becoming a genuine buzzword. But what does it mean? Is it truly possible to execute code with no processing on the server? Are servers a thing of the past and on their way to becoming a big no-no? Is it even possible to work without a server? And is the era of ‘client-server’ architecture gone already?

If the answer to these questions is yes, then that gives rise to more questions like these. If not a server, then who does the processing? Will this situation lead to the client’s workload becoming heavy with heaps of processing? If you have more questions along these lines, then read on!

Before delving into the ‘serverless’ world, it is important to understand what the term means, what it covers and what it doesn’t. Here’s a quick overview to get you up to speed,

What ‘Serverless’ is and what it is NOT

IoT – ‘Internet of Things’ is another buzzword doing the rounds in the tech circuit.

IoT is essentially all those devices in the field which have the capability to communicate with the Internet for sending messages. The meaning and purpose of the messages is different for each device, depending on the application of the device. For example, a device in healthcare will send a message indicating health parameters of the patient who is wearing the device, whereas a device in a water plant will send a message indicating water quality.

But the best way to explain what IoT is, is through a representative photograph. They say that a picture is worth a thousand words – and this one picture says it all!

Depending on the type of device and the industry, there can be multiple messages going out per day, per hour or even per minute. Those messages cannot be going into a wormhole, never to be deciphered or analyzed. ‘Someone’ needs to be listening to those messages sent by all those little devices in order to make them effective and useful. But that ‘someone’ cannot be a person. For instance, a doctor cannot and should not keep monitoring the measurements sent out by a health belt worn by a patient all day long – a piece of software is a better fit for this job, which is monotonous yet requires accurate and timely response.

So, the whole IoT story boils down to this simple expression –

Is combining the benefits of serverless architecture with IoT possible? This question comes to mind because of the following limitations arising out of the typical architecture –

This is where the serverless solution comes in.

It will help if we take a look at an end-to-end case study that focuses on developing an IoT solution using serverless architecture on a specific cloud, Azure in this case. It will fit the bits and pieces together and provide a concrete set of components to support the abstract discussion we’ve had so far.

IoT Hub is a managed service, hosted in the cloud, that acts as a central messaging hub for bi-directional communication between your IoT application and the devices it manages. It provides the following main features –

The IoT Hub Device Provisioning Service is a helper service for the IoT Hub that enables zero-touch and just-in-time provisioning to the right IoT hub without requiring human intervention, thereby allowing customers to provision millions of devices in a secure and scalable manner.

All the device needs to know is that it must ping the device provisioning service in order to get attached to an IoT Hub. An organization can create multiple IoT Hubs for load distribution, but it doesn’t need to hard-code IoT Hub references in the devices. When the device pings the DPS, it gets registered to a specific IoT Hub which gives the connection string to the device.

With just these 2 components, the device communication is all set up! But what about having to process the tons of messages being emitted by your devices? That’s where Azure functions come to the rescue! 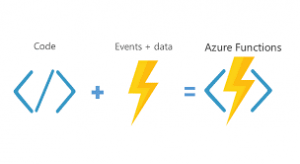 Azure Functions allow users to easily run small pieces of code, or “functions,” in the cloud. You can use a development language of your choice, such as C#, F#, Node.js, Java, or PHP. Now, trust Azure to scale as needed and pay only for the time your code runs. Azure Functions let you develop ‘serverless’ applications on Microsoft Azure.

The required components fit together as ‘serverless IoT’ on Azure as described in the following diagram. 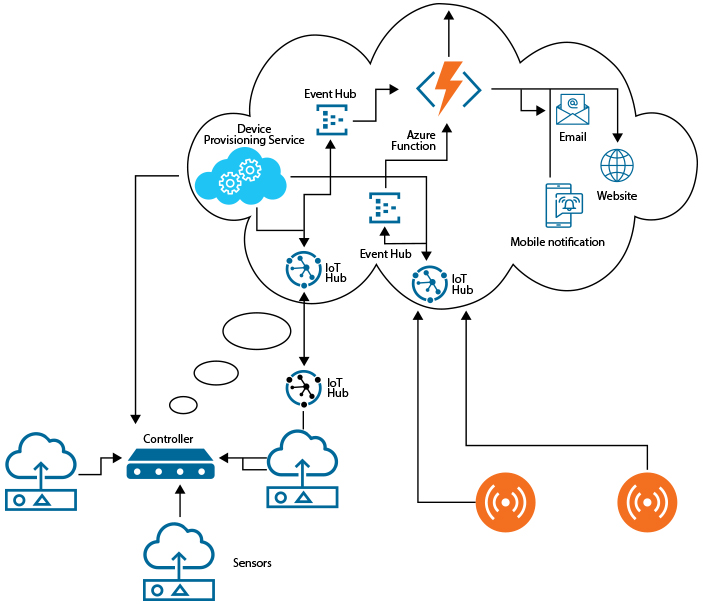 A brief description will help you understand the flow of the above diagram,

This flow does not talk about provisioning resources for functions, or IoT Hub, thereby making it a perfect case of ‘serverless’ architecture!

A day in the life of a Lead Salesforce Consultant: Meet Sam Cheung