After the diagnostic data is collected, it must be transferred to Windows Azure Storage for persistence and access. Transfers can either be scheduled or on-demand.

The DiagnosticsMonitor is responsible for transferring file-based logs, performance counters, and event logs to Windows Azure Storage. You can configure DiagnosticsMonitor to also monitor a file directory in a Windows Azure instance. It can then push the changes in directory files to blobs in Windows Azure Storage, which are then accessible from any application having access to the storage account (even applications running locally, outside of Windows Azure). By making use of this feature, it’s easy to monitor files in Windows Azure instances without having to connect via Remote Desktop. For example, you can configure Diagnostics to monitor the log folder of Tomcat and access the log files that are pushed as blobs for debugging and data analysis.

The instances running diagnostics persist the diagnostics data to a centralized location in Windows Azure Table and Blob storage. This data can be retrieved later for analysis.

Note: The enabling of diagnostics is independent of any Java application you write.

o StorageAccountConnectionString is a required attribute to specify the storage that is used for transferring the diagnostics data.

o OverallQuotaInMB is an optional attribute to specify the amount of local storage that is allocated for buffering the diagnostics data. The default value is 4 GB. To increase the default value:

– Add the LocalStorage tag to ServiceDefinition.csdef.

o ScheduledTransferPeriodInSeconds is an optional attribute to specify the timespan after which the transfer must take place. The default value is 60 seconds.

┬╖Directory is the child node. It represents each directory from which contents must be transferred.

– ContainerName is a required attribute to specify the name of the blob container to which the contents of the directory is transferred.

– LocalPath is a required attribute to specify the location of the directory in your role instances.

– IsLocalPathRelative is a required attribute to specify whether the location of the directory is relative.

– DirectoryQuotaInMB is an optional attribute to specify the maximum size of the local buffer that is used for transferring contents from this directory. The default value is 1 GB.

Note: The combined values of this attribute for all Directory nodes should not exceed the value specified for the OverAllQuotaInMB attribute defined in the root element.

o ScheduledTransferPeriodInSeconds is an optional attribute to specify the timespan after which the transfer must happen. The default value is 60 seconds.

┬╖PerformanceCounter is the child node. It represents system performance counter whose value is to be captured and transferred.

– CounterName is a required attribute to specify the system performance counter name.

– SamplingRateInSeconds is an optional attribute to specify the sampling frequency for the capture of the system performance counter value. The default value is 10 seconds.

The following is the sample content of an input configuration XML file with default attribute values.

It is not recommended to use default values for attributes. For example, in case of performance counters, the default value for ScheduledTransferPeriodInSeconds is 60 seconds and for SamplingRateInSeconds is 10 seconds. It means that after every 10 seconds, performance counters are collected and the collected counters are pushed to Windows Azure Table after every 60 seconds. While this seems fine, imagine running hundreds of compute instances, each pushing performance counters to Table Storage. Eventually this could become a storage and network bottleneck, and there’s a cost for transactions, albeit a small one (a penny per 10,000). From a polling standpoint, this could have a negative impact on the performance of instances running the diagnostics.

Following is the sample of the input configuration file with values assigned to ScheduledTransferPeriodInSeconds as 600 seconds and SamplingRateInSeconds as 120 seconds.

Specifying appropriate SamplingRateInSeconds ensures that diagnostics data is generated for the lesser number of times, which is sufficient to generate data required for analysis. For example, if performance counters are used for auto-scaling purposes and the auto-scale code only analyzes performance counters every 10-15 minutes, there’s no need to upload this data to storage more frequently.

Here’s a snippet of the relevant C# code in the .NET project.

The following are the dependencies that are found in %ProgramFiles%Windows Azure SDKv1.6ref.

The ConfigureAzureDiagnostics binary and related files are available at https://github.com/PersistentSys/cloudninja-for-java/tree/master/AzureDiagnosticsTool.

The following image illustrates the approot directory of the worker role. This directory contains ConfigureAzureDiagnostics and the related files along with the application binaries (HelloWorld.war). 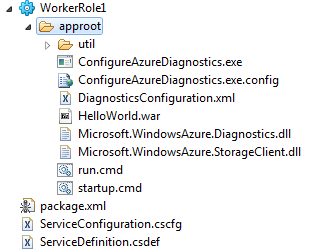 After deploying the Windows Azure project, ConfigureAzureDiagnostics runs as a background task in the worker role instances. As a result, directory contents and performance counters are transferred to Windows Azure Storage.

ConfigureAzureDiagnostics collects performance counters and persists them to Windows Azure Table named as WADPerformanceCountersTable. The following image illustrates sample data in this table.

We can query WADPerformanceCountersTable to retrieve performance counters for analysis.

In the above code:

Storage accounts are free to set up, so it doesn’t add any cost to create multiple storage accounts for a single application. Billing is specifically based on storage consumed, transactions executed, and bandwidth out of the datacenter.

In this article, we discussed how to configure diagnostics for Java applications. Diagnostics data is persisted centrally to Windows Azure Tables and Blobs, which can be retrieved for analysis. Diagnostics data helps in troubleshooting, performance measurement, resource usage monitoring, and so on.