If your CEO is on “Undercover Boss,” RUN!!! You’re working for the wrong company

Blog by Ken Montgomery, posted on May 16, 2016 in Life At Persistent

One of the best things about my job, working at Persistent Systems, is I work for a CEO who can never, ever appear on the CBS show “Undercover Boss.”  Whew!  More on that below. 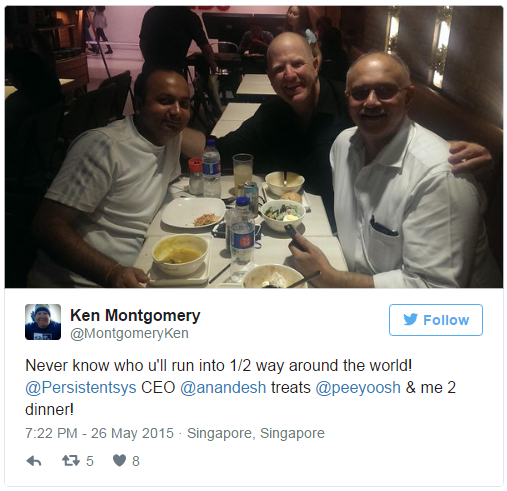 So, I was originally going to title this post “If You’re a PR Person and You Get Your CEO on Undercover Boss, You Should be FIRED!” But then I thought, the sort of company that would think it a good idea to have its CEO on Undercover Boss probably deserves the PR they get and so it’s a good fit.

If you haven’t seen the weekly CBS show Undercover Boss it is, as you would guess, a show about how CEOs (or similarly high level leaders) of companies disguise themselves to go out and interact with the rank and file of their company to learn more than they ever could from their corner office. If you’re like me, you’ve just rolled your eyes to the back of your head.

Each show follows a predictable pattern. A quick overview of the company. CEO then leaves his or her big house and adoring family to go check into – gasp – a low end hotel / motel where presumably they’ll be more in touch with how their employees live. They then are put in a disguise that if anyone knew them would fool no one. Through the course of the show they have a multitude of epiphanies about how hard life is for their workers and changes that need to be made (had they only known!). And then it’s  topped off with a truly pathetic “Queen for a Day” like segment where after an identity reveal, a couple of down-on-their-luck yet earnest employees are bestowed some life-changing gesture by the CEO, cameras rolling, everyone cries, hugs all around, CEO returns home a changed person and cut to closing credits and tease for next episode.

Think about it. The entire premise for appearing on this show only works if the company of which the CEO is the steward, is a pretty awful place to work, or at the very least has awful communications from the CEO.  The rank and file must be so unfamiliar with the CEO that no one recognizes him or her through the cheezy disguise. And this is something you want to spotlight on national TV? This is a textbook example of a company failing in almost every tenet of effective leadership communication.

I’ve been fortunate enough to work for CEOs who are fully engaged with their employees. At Quest Software for example, we were exploring the possibility of some painful layoffs, not something people wanted to do. When presented with a list of several hundred employees who might be impacted (we had roughly 4,000 employees), CEO Doug Garn literally knew every employee on the list and insisted on ways to lessen the impact. We used to joke that we could never get Doug on this show because he’d probably had a beer with everybody in the company at some point!

Secondly , the CEO is shown to be so detached from the day-to-day workings of his or her own company they don’t even know, as seen for instance in this episode (you’ll need a subscription), that their employees don’t have time to use the bathroom so resort to, if you will, taking care of business in their garbage truck.  Appalling. I mean, seriously, this is something that took nothing short of appearing on national TV for this exec to learn? And you actually think it’s good to look THAT out of touch as a leader? As a PR person – let alone a human being – it is cringe inducing.

As I said, the shows end with the CEO coming to the rescue to help hard luck employees with medical or educational expenses or some other sorts of things – the “feel good” moment. The employees are in tears as they thank the CEO for his or her magnanimity, and the CEO is a changed person.  Puh-lease. Why would you put your employees in that position in the first place? Why wouldn’t you provide proper health care? Educational opportunities?  This feels like nothing more than an ego play, or helicopter philanthropy. 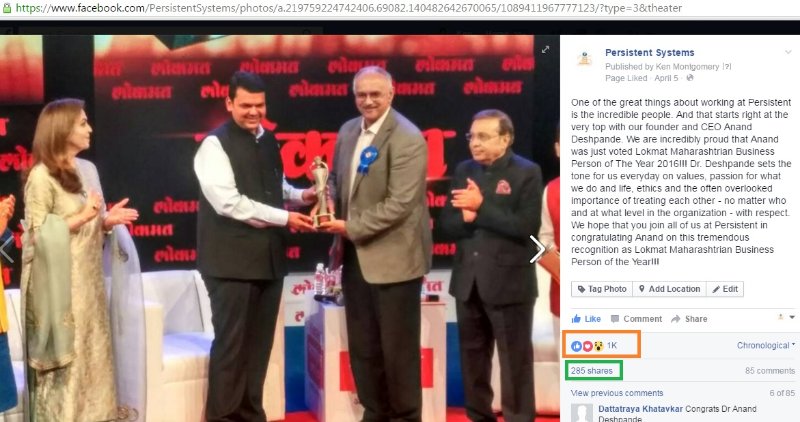 I work for a great company, Persistent Systems and that starts with our CEO, Anand Deshpande –  that’s him up there in the in the photo taking selfies with employees (this could be happening on any day).  Just last month Anand was recognized as Lokmat Maharashtrian Business Person of the Year, based in large part on the feelings of our employees. 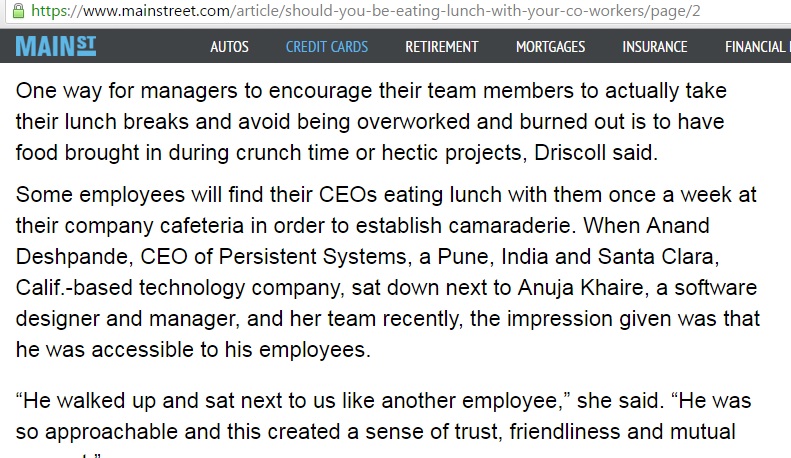 Last year an employee shared a story with me (see above) about her encounter with Anand. And the fact of the matter is you could hear a similar story from thousands of employees. I shared that story with a reporter at TheStreet.Com and she liked it so much she included it in a story she wrote “Should You be Having Lunch  with Your Coworkers?” I love the idea that at Persistent, that coworker you’re having lunch with just might be our CEO!

In the meantime  I look forward to seeing more employees’ selfies like this! 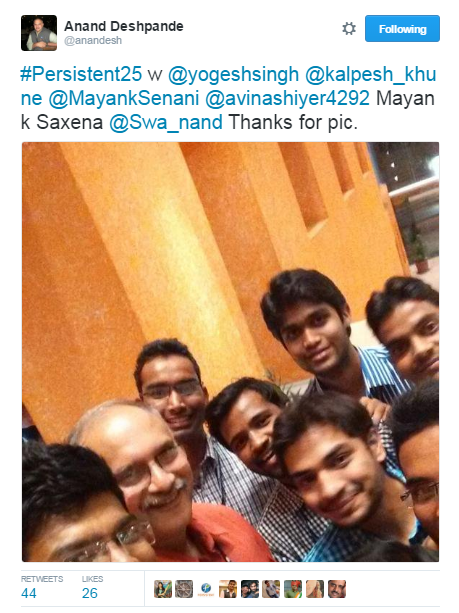 You think I’m being too judgmental? Do you work for someone who should be on Undercover Boss… or better yet do you work somewhere that should never be on undercover boss? Would love to hear from you.

You’ve Migrated to the Cloud, Now What? 4 Critical Cost-Saving Practices