WARNING!!! @LinkedIn is making you look like a phony! Don’t be a Replica!

Blog by Ken Montgomery, posted on May 23, 2016 in Life At Persistent

I recently celebrated my second anniversary here at Persistent Systems. I could not be happier… and as with almost every social media platform now, people with whom I am connected were quick to congratulate me – in fact some doing so on LinkedIn before it was even my actual anniversary! At first I thought it was really nice people took time out of their day to send me a quick message, in fact some seeming endearingly personal – but (and there’s always the dreaded “but”) that soon turned, and I actually became a little annoyed at the lack of authenticity, and I fully blame LinkedIn for making those people look bad to me (seriously). I’ll get to that in a moment.

But first let me explain, the absolute #1 thing I try and convey to people and organizations when communicating is keep it sincere and keep it real. People can smell a lack of authenticity real quick, and once they do, they no longer believe what you have to say. A recent text book example of this was during this year’s Rose Bowl when Carly Fiorina tweeted out the below:

This was rightly panned far and wide as it was simply, obviously, painfully not sincere and nothing more than pandering. As I wrote in my blog, Ms. Fiorina could have easily achieved her goal, and gained points for candor and honesty, by simply stating what everyone thinks she MUST have been thinking “Iowa, you know I love you, but today I’m rooting for Stanford. #Rosebowl.”

We live in a world where we want to use data to pinpoint exactly what works and what doesn’t, and in many cases do things more effectively than possible for a human to do. That applies to communications too – in fact I am posting this blog right now, because through data I’ve determined this time of the day, on this day of the week, is when I get maximize reach, thus being able to communicate more broadly. Now, while AI has made great strides, communications – at the human level – still needs humans to be effective. I recently had a conversation with a very smart and respected marketing executive who said “we need to automate authenticity.” My reaction was, as you might guess, what???  Now I get the desire to try and do this, after all we’re automating everything, many things we may not have ever thought possible, like driving! But communications must be authentic and this is where I come back to LinkedIn and what I was saying at the top of this post.

Simple can be authentic. So clicking the like icon for a post, is a perfectly fine and authentic way to show the writer you liked what they wrote. And looking at all those people who like your anniversary, well, that makes you feel good. Sharing the post, same thing. But where it gets tricky, and where I think LinkedIn and other sites do you a tremendous disservice, is when you try and make it look like you’re being more authentic than you are… because, like Ms. Fiorina, people can see through that and then your intentions are undermined and your credibility questioned. So the below message is the point: 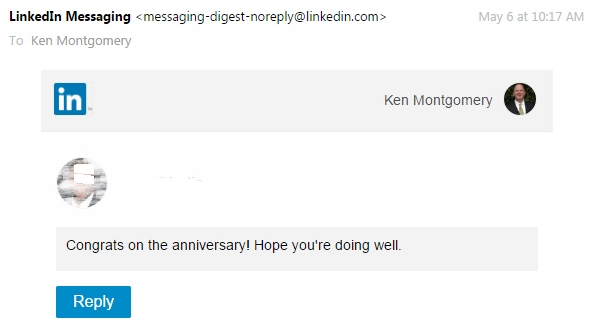 At first, when you read that message it seems nice, that person took some time to send me a nice message, even wishing me well!  But wait a second, does that message look familiar? Scroll back up…  And then soon, one after another, these started filling my inbox….

After, literally, the 50th, 60th, 100th of those messages you just don’t really see them at all, and so what purpose do they serve?  What they tell me is someone couldn’t be bothered to use the reminder from LinkedIn to send a personal message, and instead, enabled by LinkedIn, to think they’re “networking” or “communicating” simply by choosing an autocomplete message.  This is bad, it’s not real and it’s most certainly not authentic. It’s OK to not spend a lot of time or thought on something. Seriously, that’s OK. What’s not OK is to make it look like you’re doing more than you are. 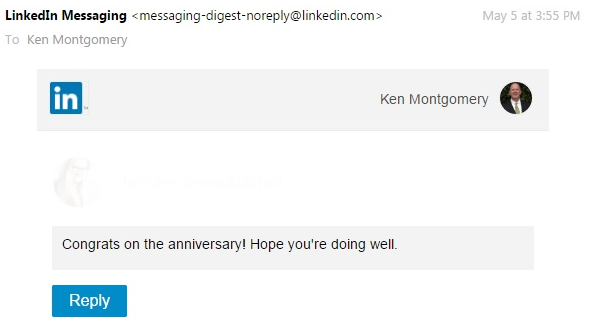 And here’s the thing, it’s so easy to make it real. One, you can take the few moments to send an authentic message. 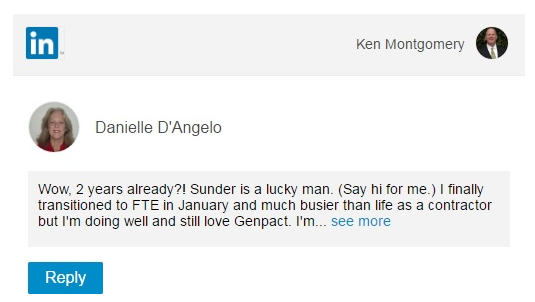 Isn’t it nice to get something like that!  But even if you don’t do that, you can still have FUN and customize the auto-message that is sure to catch the person’s eye: 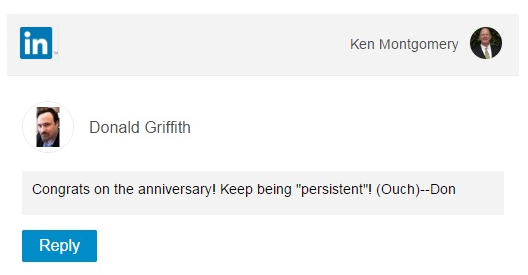 Awesome. I like it!  And, to be honest, this from my colleague Nilesh might be my favorite – 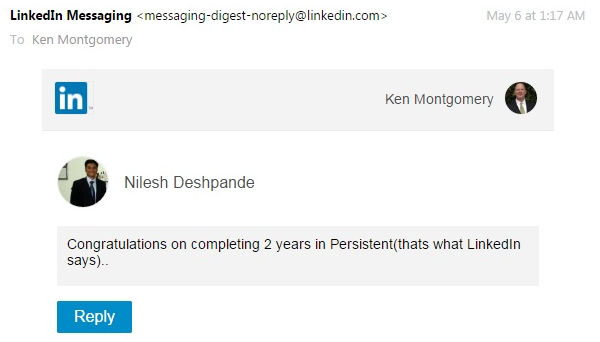 It’s such a brilliant way to say “hey I didn’t know this , but now that I’m prompted, congrats!” It’s awesome in its effectiveness because IT IS AUTHENTIC!  Nilesh isn’t trying to pretend he’s doing something he’s not!

That’s advice I think we could all do well to follow. Don’t be lulled in to being a replica. Because when it comes to communication, the sincerest forum of flattery isn’t imitation. It’s authenticity.